Jeanne Opgenhaffen is a contemporary ceramic artist, born in 1938, living and working in Belgium. Opgenhaffen has been exhibiting her internationally recognized and awarded work in Australia, Germany, Egypt, England, Israel, Italy, New Zealand, Taiwan, and The USA. Her work occupies pride of place in major museums and private collections around the world, such as the Victoria and Albert Museum and Saatchi Gallery in London.

Jeanne Opgenhaffen’s unique genius captures even the grandest, most powerful universal forces of evolving nature and presents them undiminished to the viewer on a small scale. Her inspired use of intricate, organic repetition, confined within the rectangle provides us with a precise yet utterly comprehensive definition of natural forces, the landscapes they shape and indeed even the creatures that crawl, swim or fly there.

The artist assembles hundreds—sometimes thousands—of delicately and individually shaped pieces of porcelain into a whole. Each is related its neighbor, but sings with a different voice, a different resonance. Opgenhaffen combines them into rhythmic compositions that speak to us about the nature of space, movement, growth and change. Indeed, she shows us the evolution of the universe on the micro scale, sometimes in white, other times in subtle shades of color.

“I try to express my feelings within the boundary of a square. I hope to show the essence of strong movement in a simple way, made with single basic elements.”

Her art is honest in all its tenderness. Of course, the word does not imply that every other artist does something dishonest. No rather it hints at the unpretentious nature and understated beauty of Opgenhaffen’s production, where there is neither too much nor too little of anything.

Jeanne has explored a couple of avenues from her studio in Belgium. For instance, she has worked extensively with the geometric cube ceramics, and she has created wall-mounted reliefs which are hard not to notice as something out of the ordinary.

She recently exhibited at Saatchi in London. That only adds to a long string of past exhibitions at prominent art venues and biennales around the world, her being extensively acquired by collectors, and mentioned in the art press.

The relief works in porcelain have a remarkable lightness about themselves despite the choice of medium. Logically, every one of them must weigh something, and yet their layers appear to float in the breeze like after feathers. They somehow manage to suspend gravity even when they ought to weigh a tonne of bricks. It is no mean feat, and obviously it all boils down to lot of hard grafting plus an affinity with the medium that comes from living and breathing art for decades.

Whether then the results are abstract or not – or both for that matter, soon becomes a little besides the point. You simply enjoy the pieces for their compositional strength, their rhythm, their sublime textures and subtle glazes. You begin wondering what these living pieces would look like in varying directional sunlight.

This organic semi-abstraction in 3D resonates with you in a peculiarly slow-burning way, and it does so for a very long time. There are hundreds of small wafer-thin strips of porcelain mounted together. As such it is a very deliberate and manual stunt to pull off. However with a material like clay, the artist must master something living that is sensitive to temperature, moisture and time applied. While the artist exercises full control within these constraints, she is also acutely aware that the material serves up ‘accidents’, which in turn offer creative opportunities to exploit artistically. 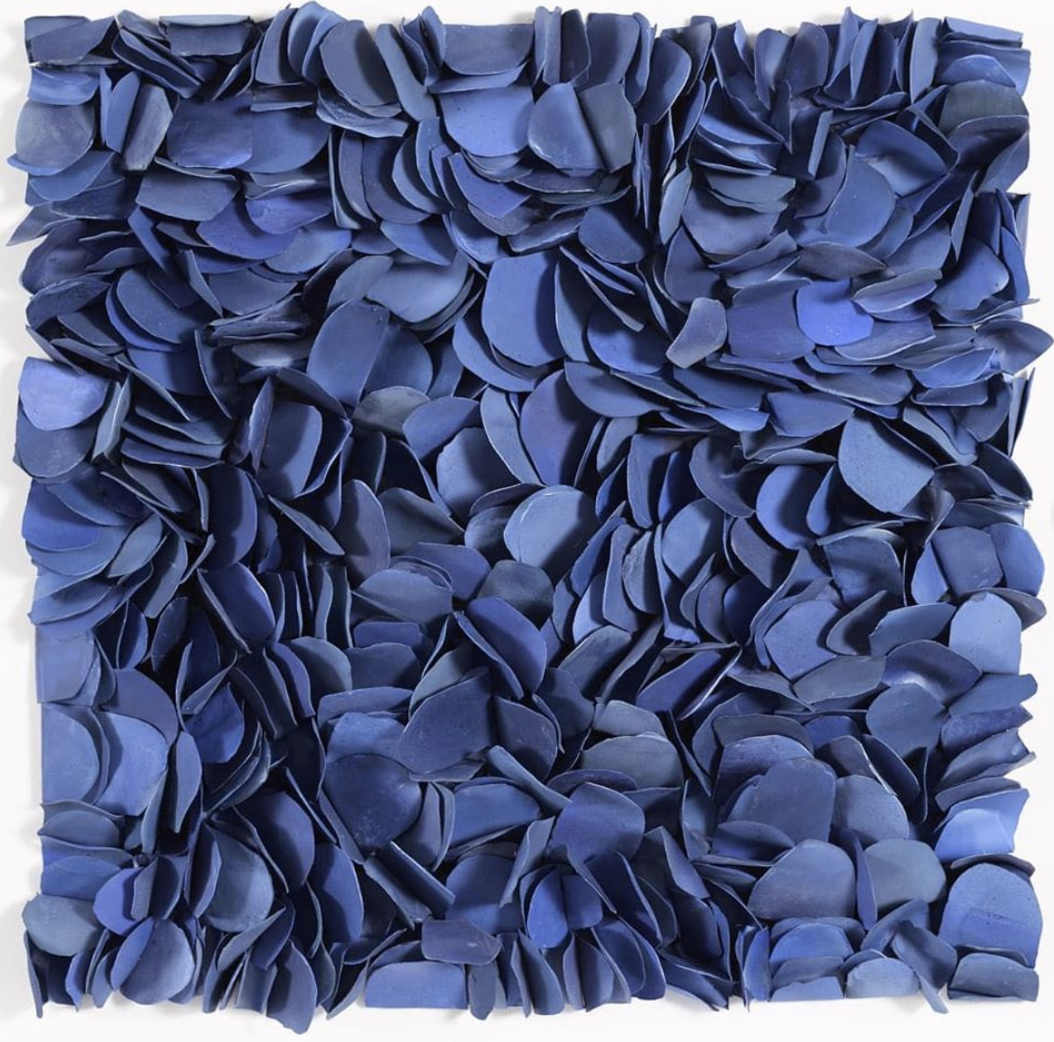 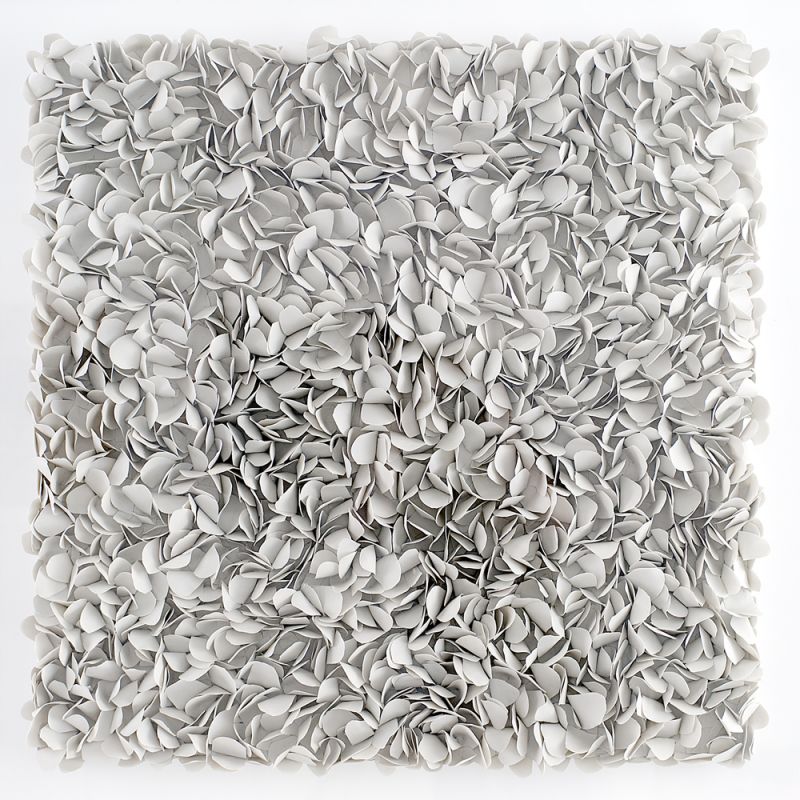 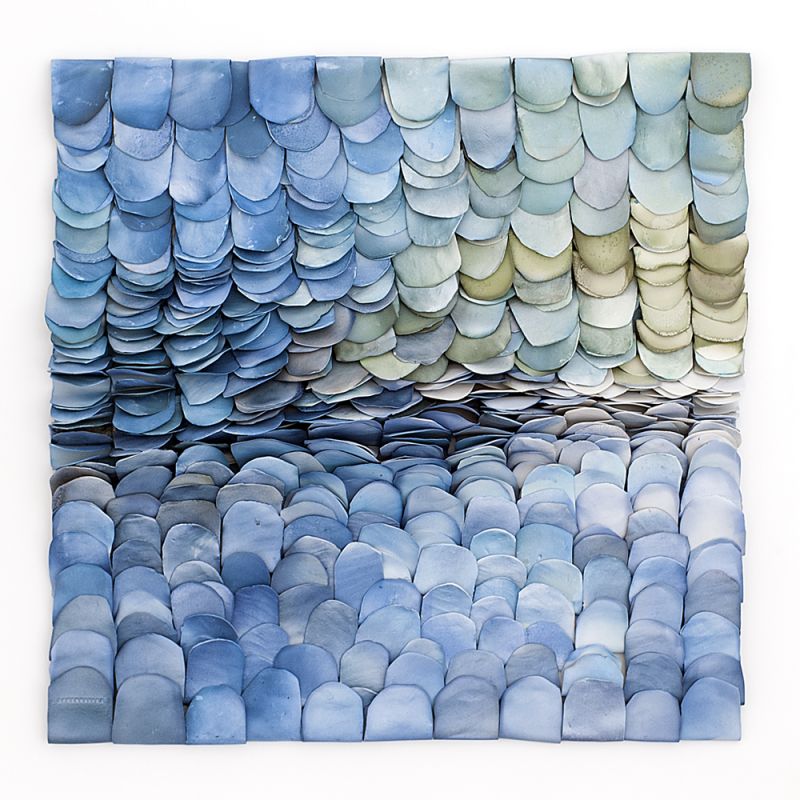 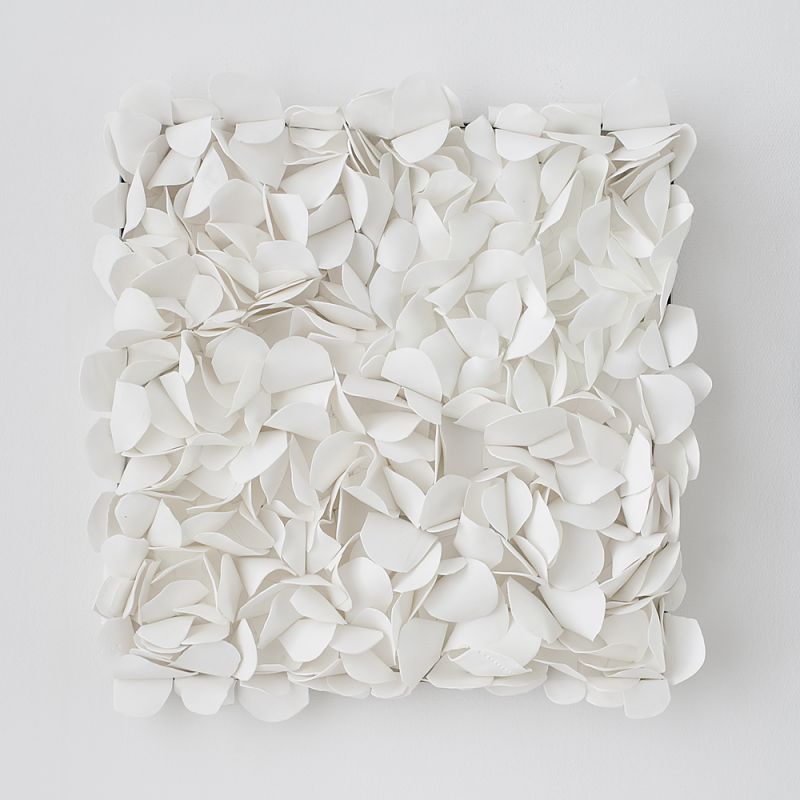 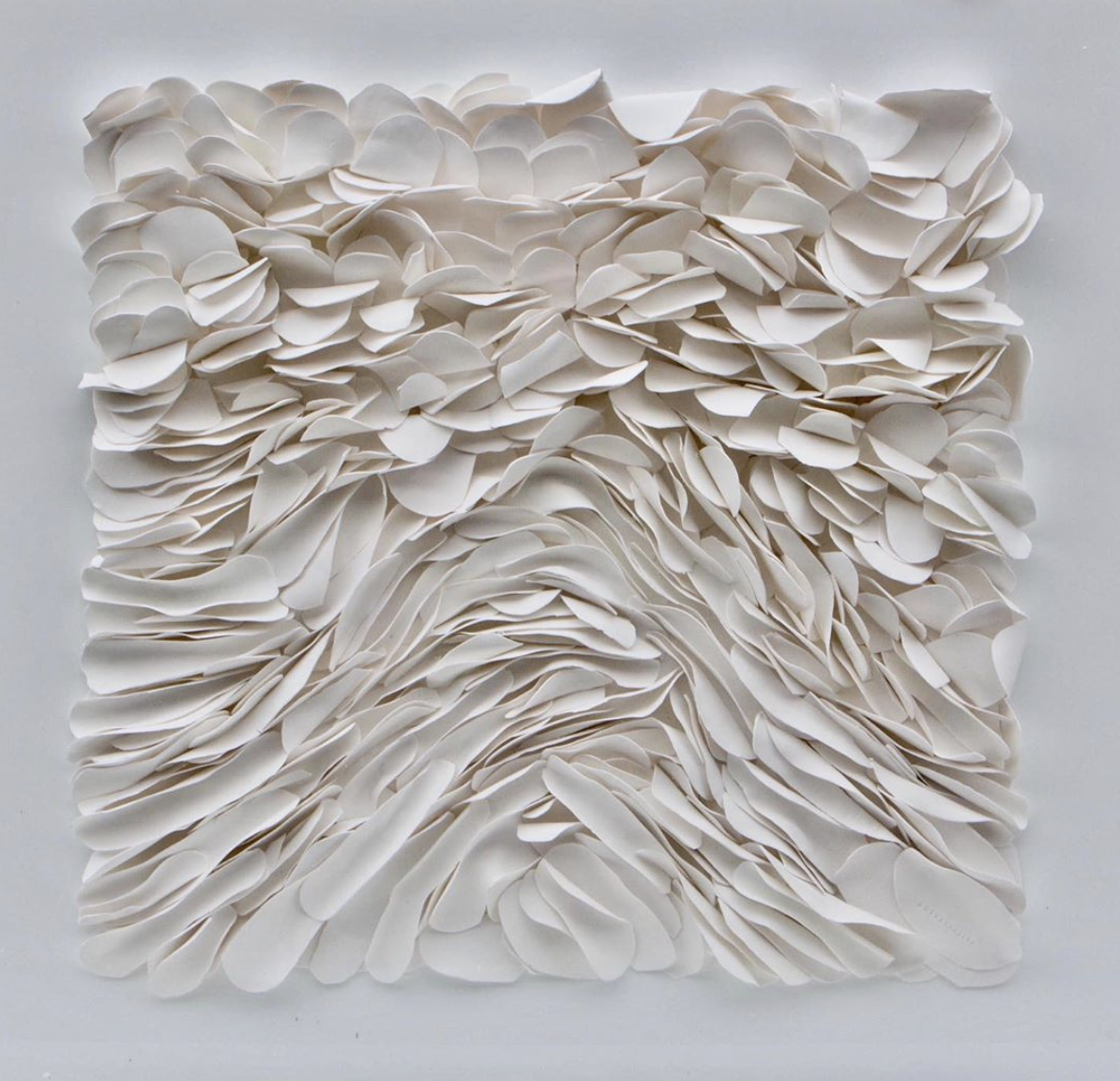 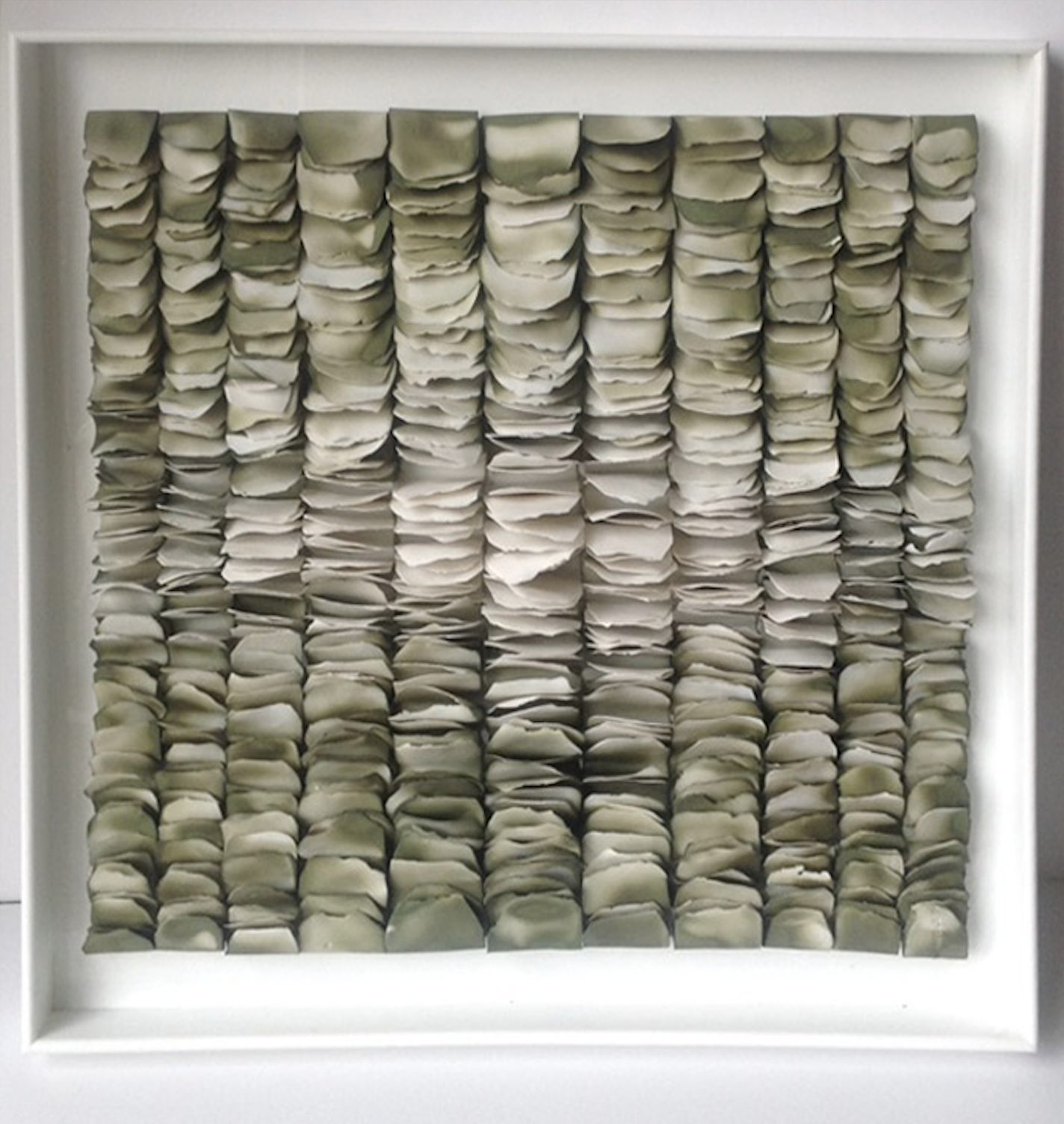 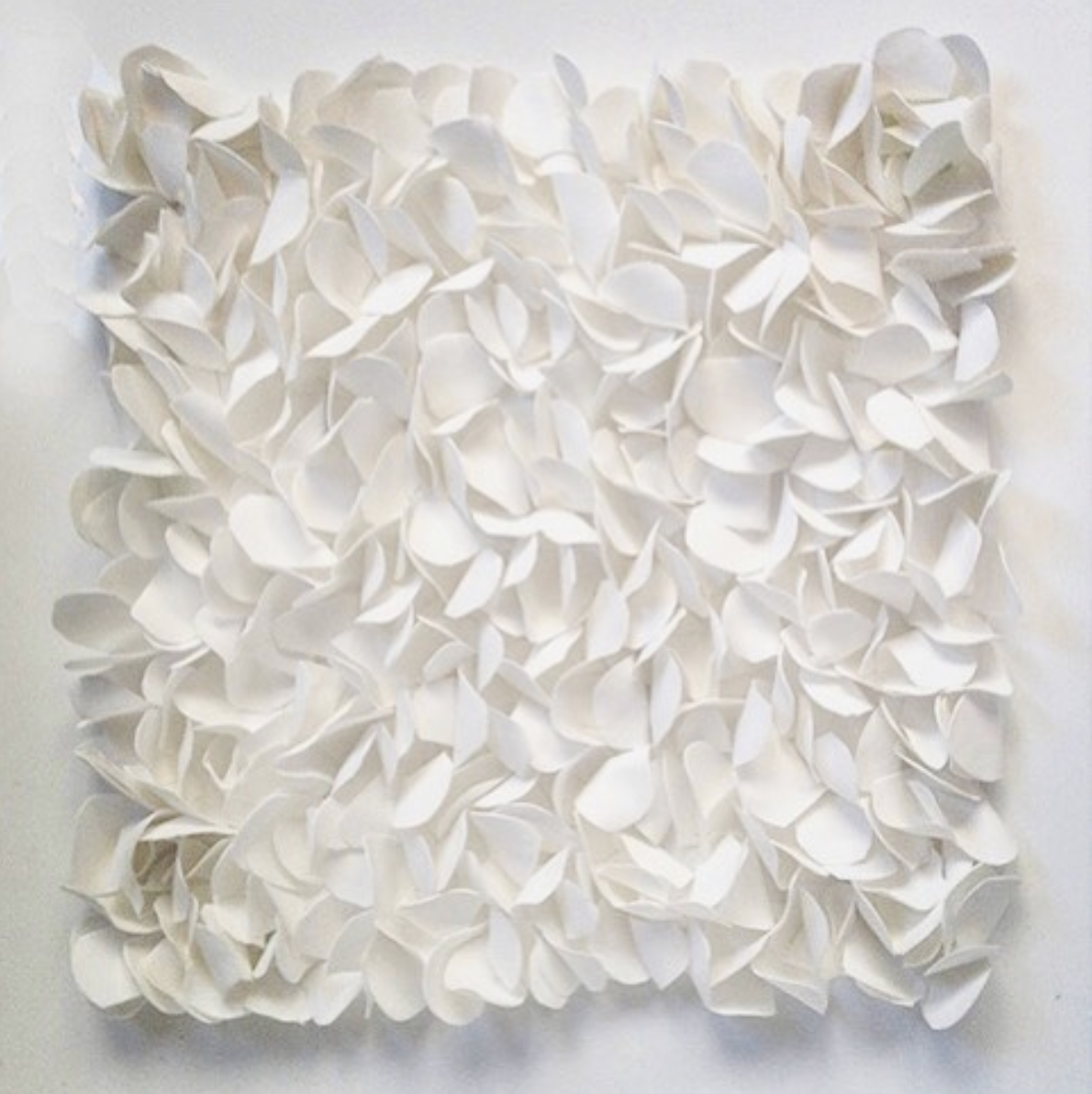 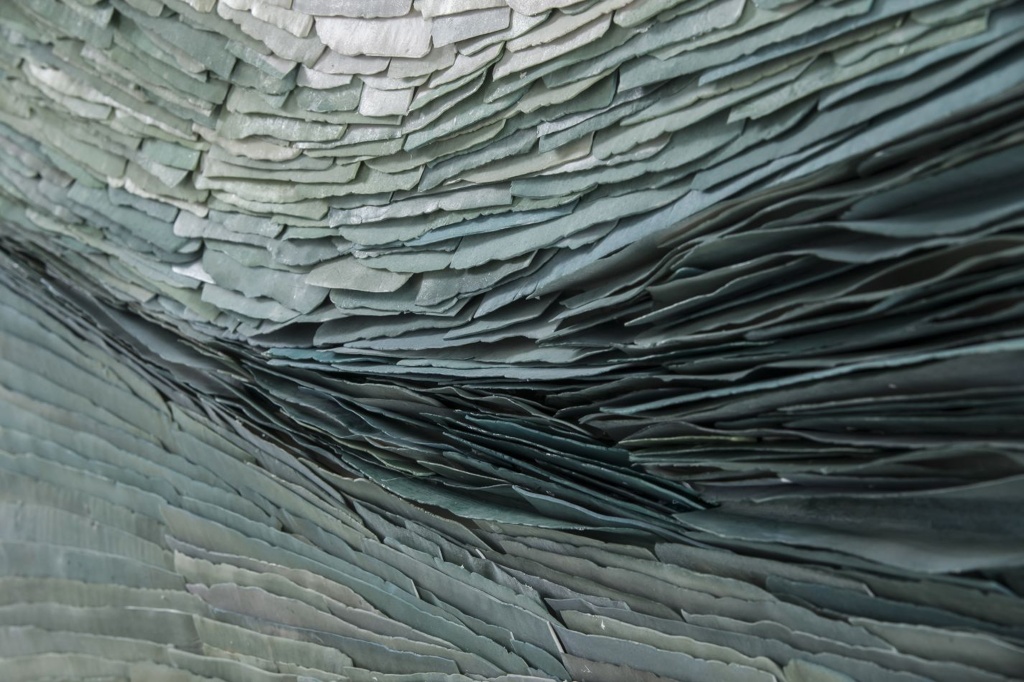 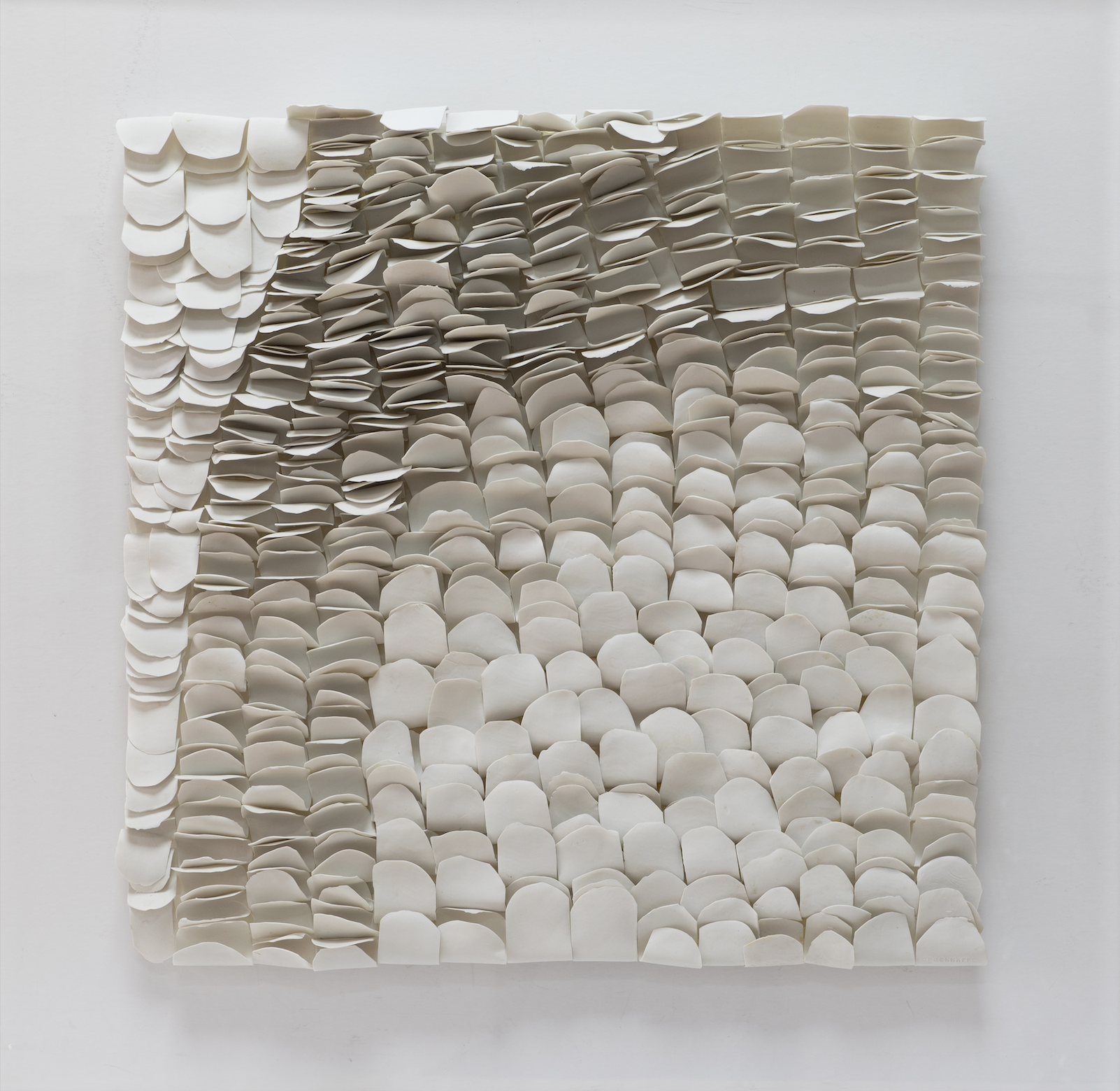 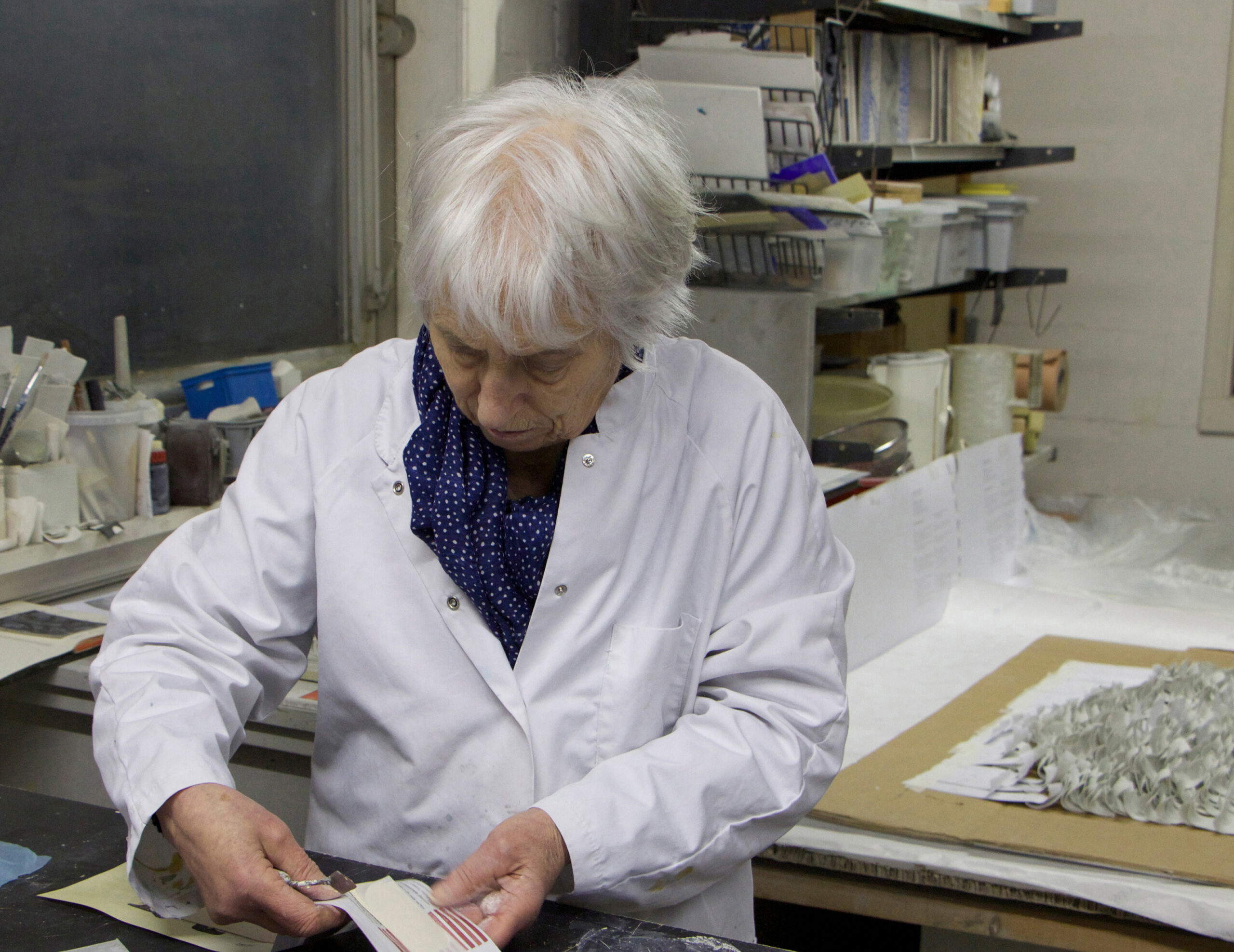 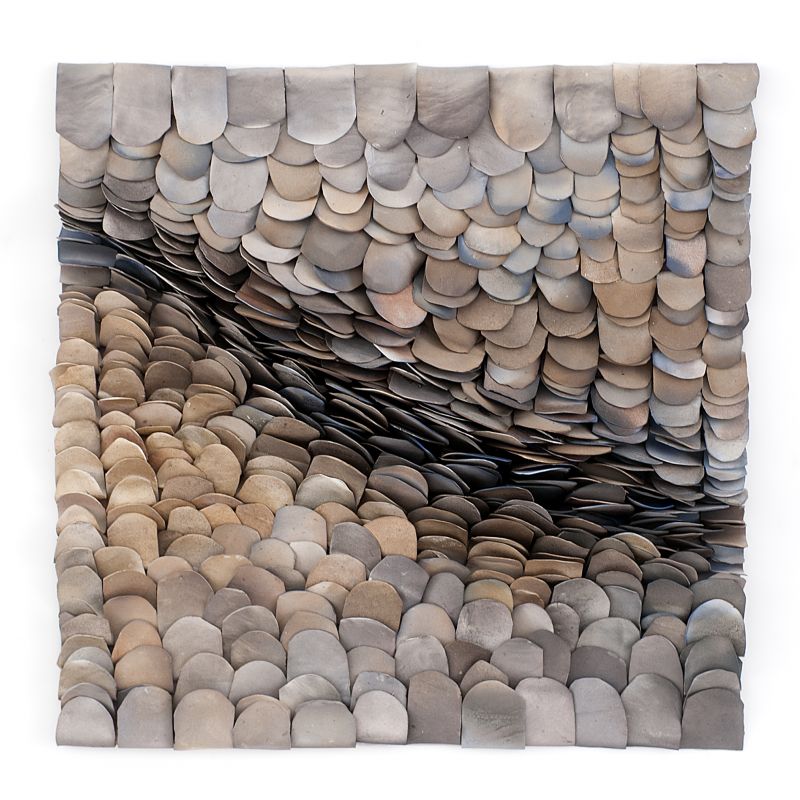 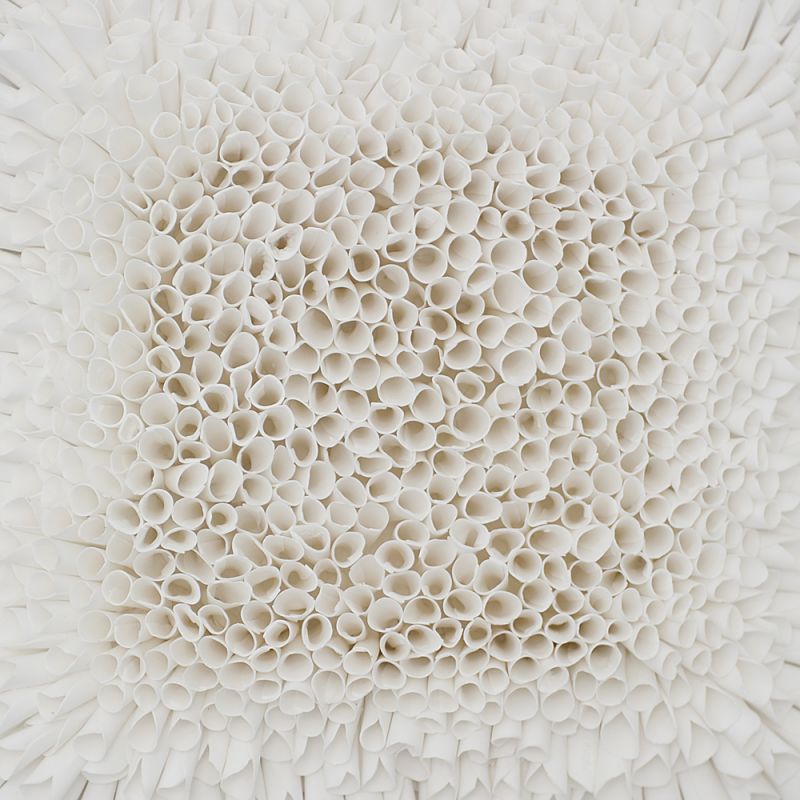 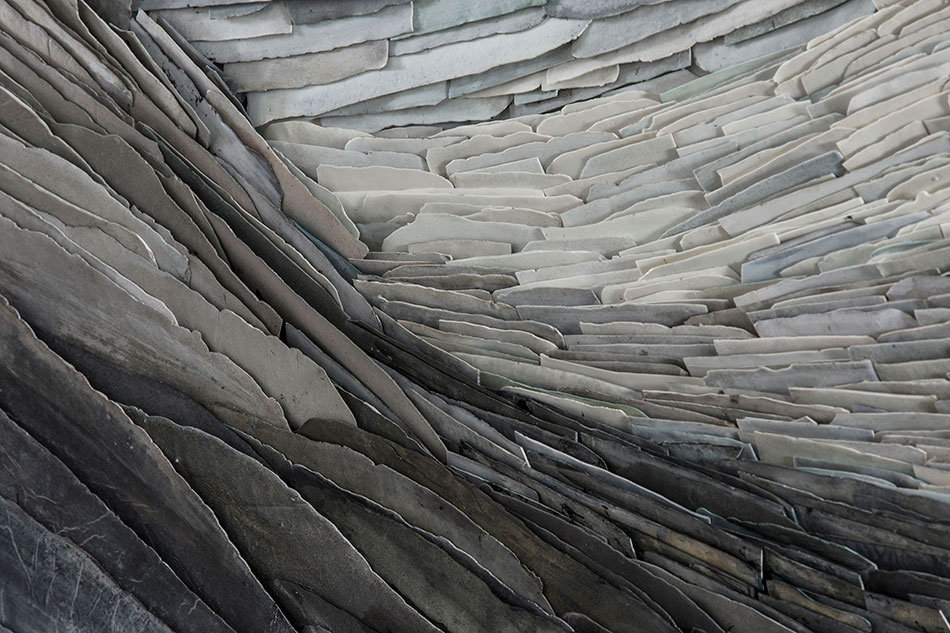 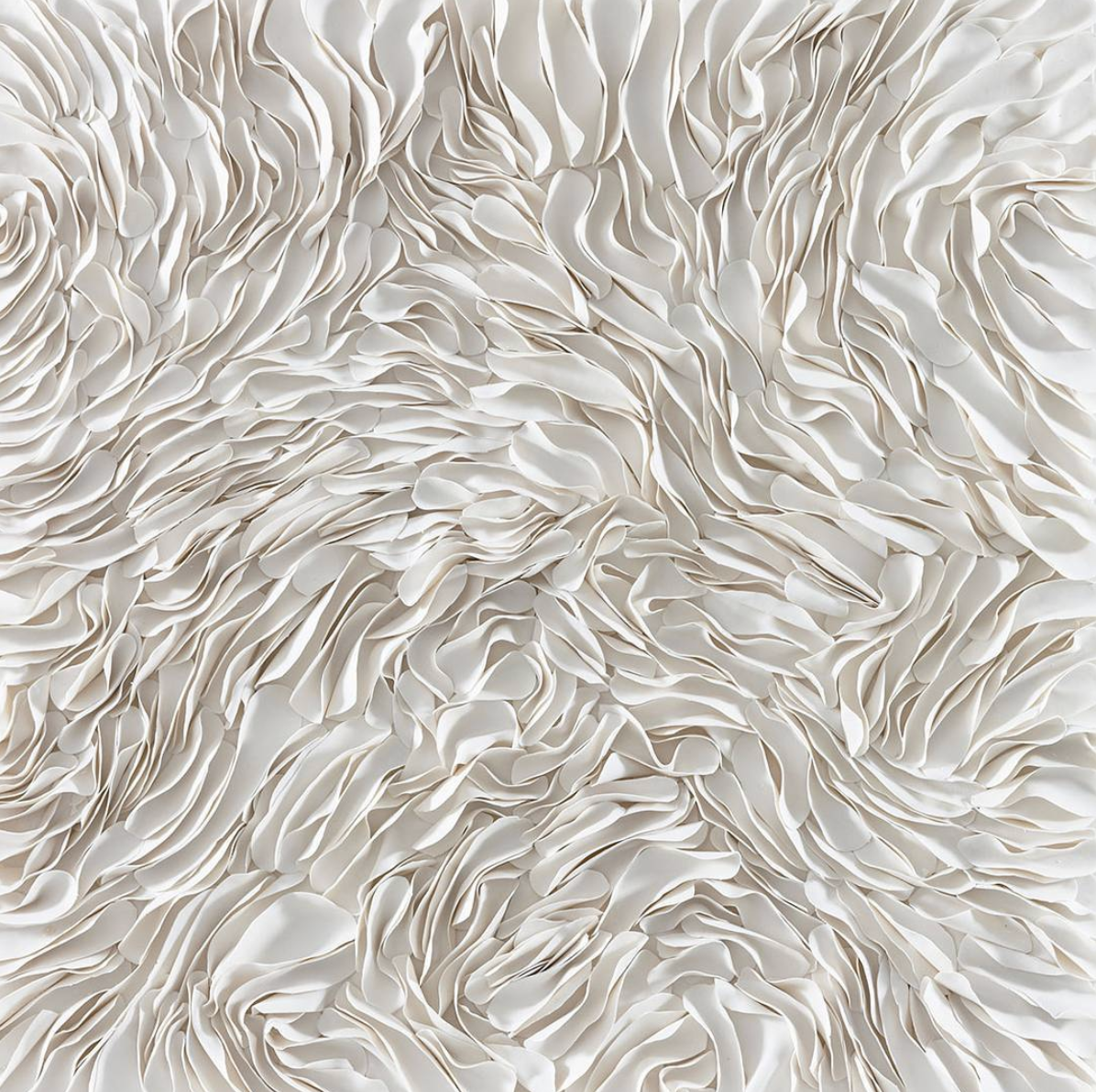 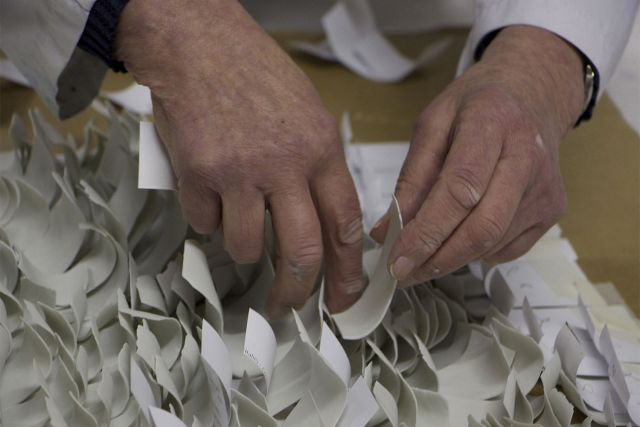 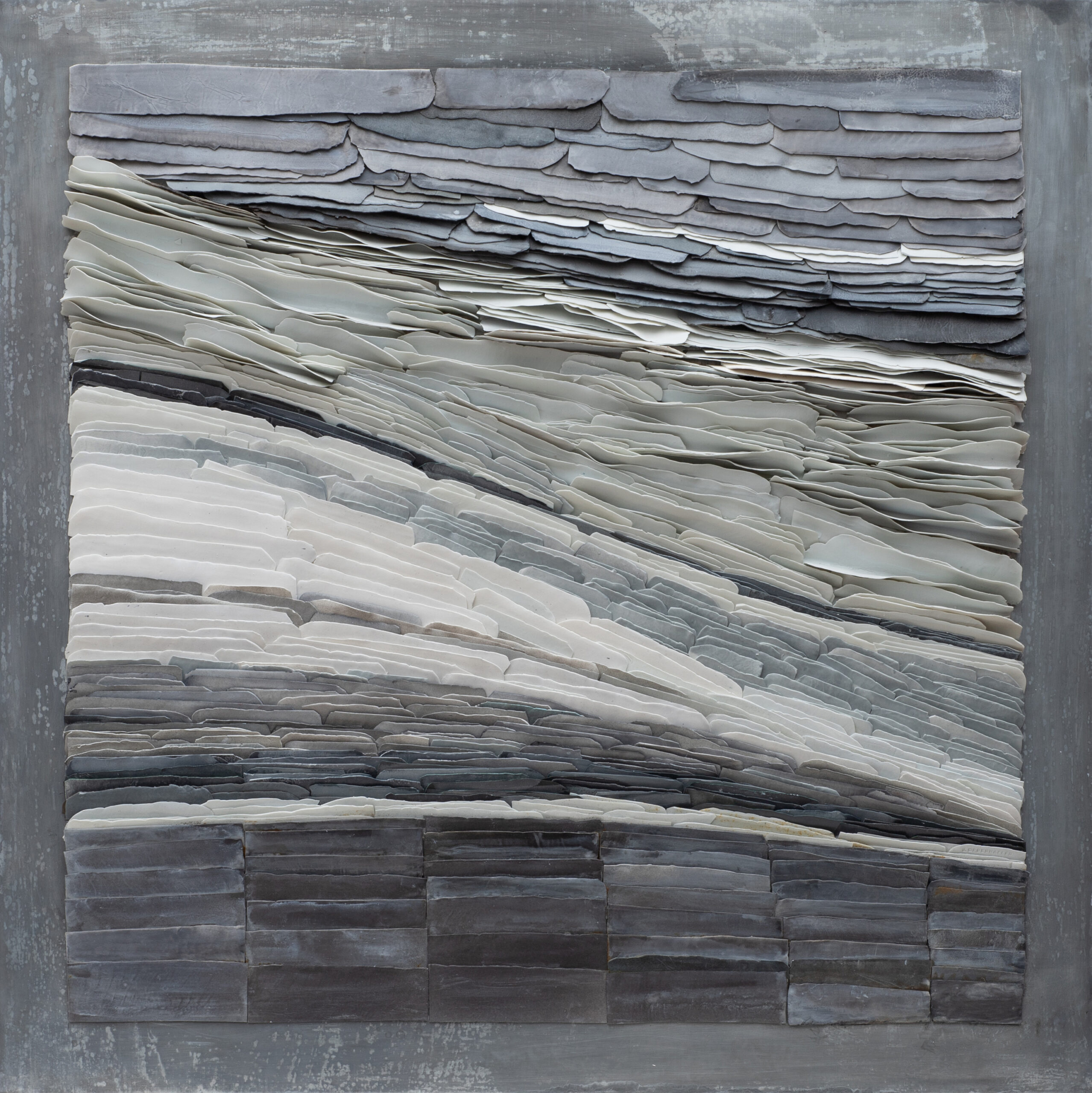 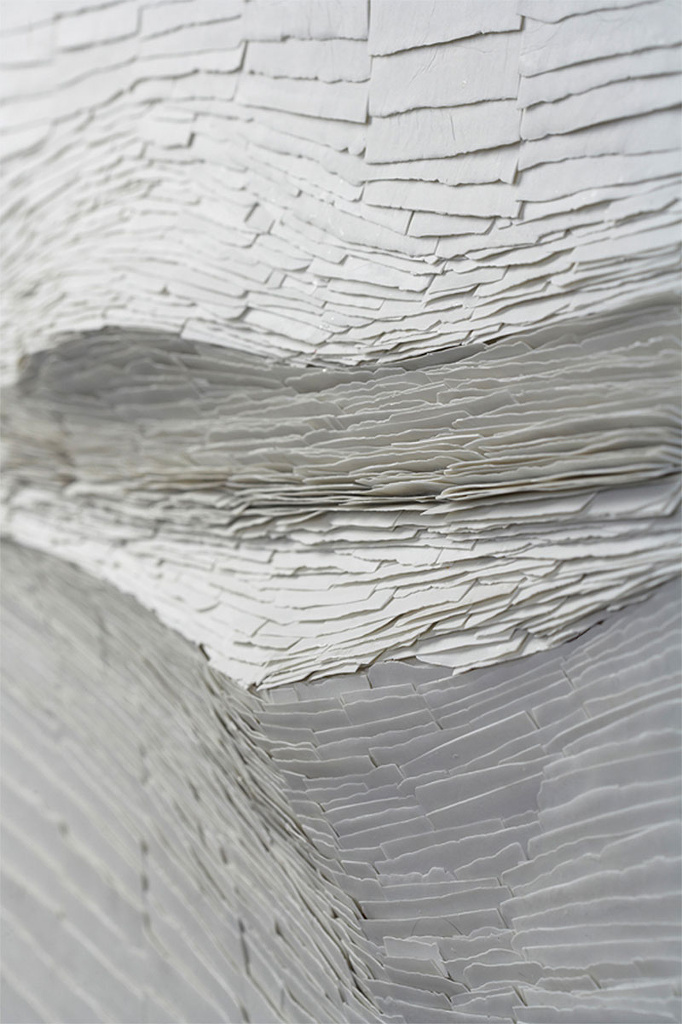 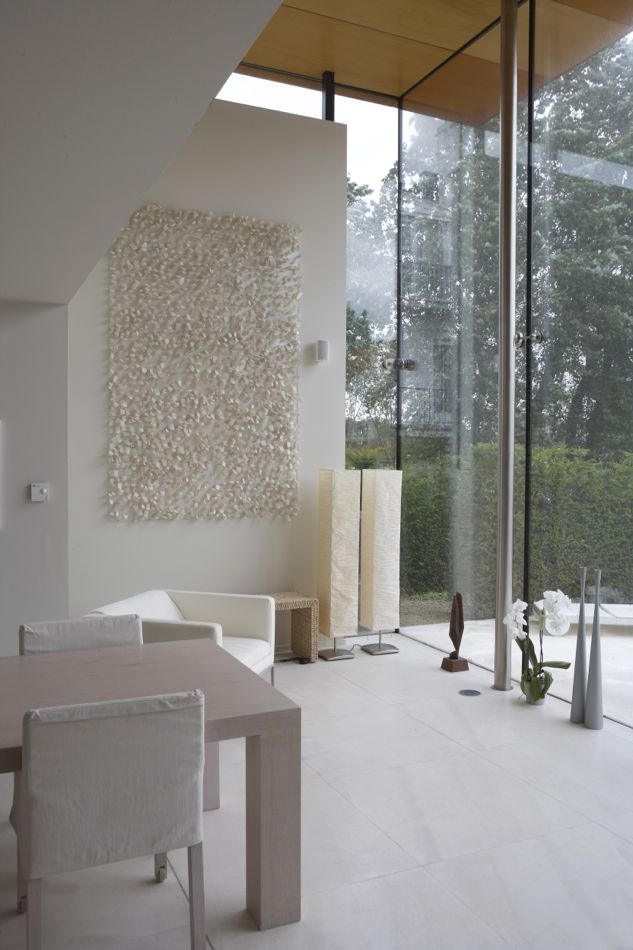 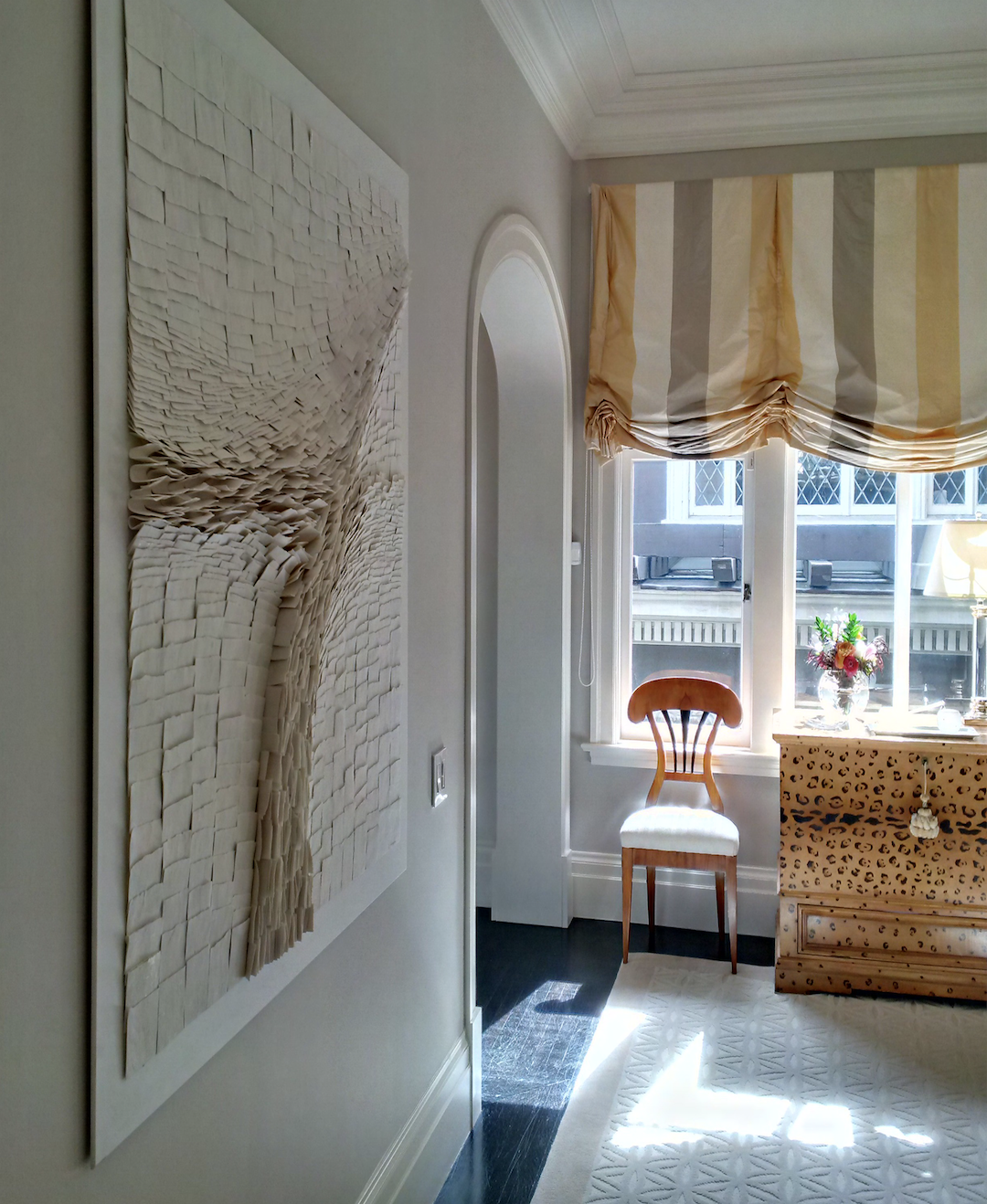